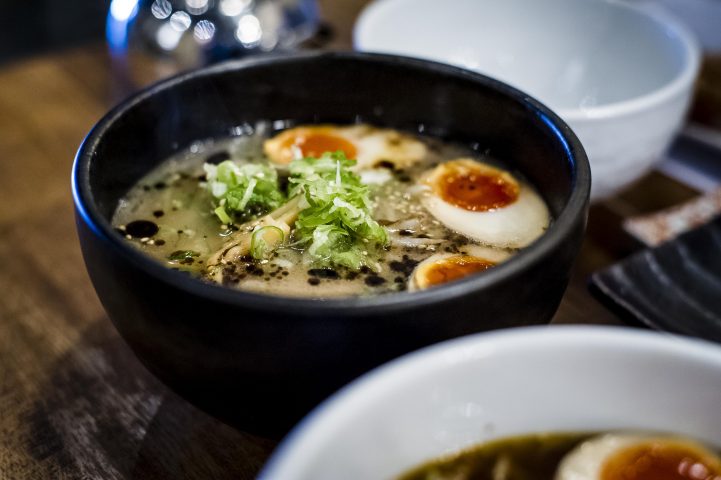 Just over 6 years after opening its first restaurant in Soho, top notch ramen outfit Tonkotsu is set to open its tenth restaurant in Ealing. Located in the new Dickens Yard development, the restaurant will serve its signature homemade noodle ramens, gyozas and Japanese appetisers alongside a selection of craft beer, sake and cocktails.  The 50-cover restaurant spans two floors, and features an open kitchen, both ground-floor and basement seating, as well as a bar top created from recycled chopsticks – once used in their other restaurants.

Ken Yamada, co-founder of the group with business partner Emma Reynolds, said today, “It’s staggering to think we’re opening our tenth site here – home to thousands of Japanese people and in the heart of a beautiful new development.  Ealing is our most neighbourhood site to date, and there is already so much support for our arrival.”  MD Stephen Evans added, “With the creation of Dickens Yard and the opening of Crossrail, Ealing has further strengthened its position as a busy, cosmopolitan centre and one we are very proud to be part of.”

Tonkotsu was launched in 2012 by co-founders Ken Yamada and Emma Reynolds. As well as the soon-to-be ten locations across London, Tonkotsu also have a ramen bar in Selfridges Birmingham, and have further plans to open in Peckham early next year.  They have just opened their 9th site in Stratford, just outside the busy shopping centre in East London, to critical acclaim.

Tonkotsu Ealing opens for softs on Friday 30th November (evening) and booking is very much encouraged.   Limited to 100 people over 2 sittings. Max table size of 4 (50% off food).